The glute bridge vs hip thrust debate is not uncommon amongst gym goers and it is for good reason.  As far as glute isolation exercises go, both of these exercises have great potential.  However, due to the similarities between the two, many people wonder which one they should prioritise.

We're going to cover the above in this article, but first, let's look at the muscles worked with each exercise...

Both exercises will primarily target your glutes, however in addition to this; you will also engage your hamstrings, hip flexors and your core muscles (more so with thrusts). 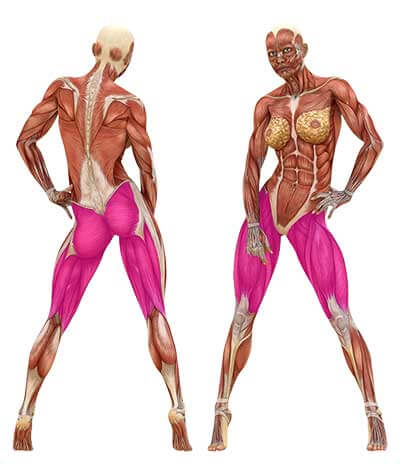 How to perform a glute bridge 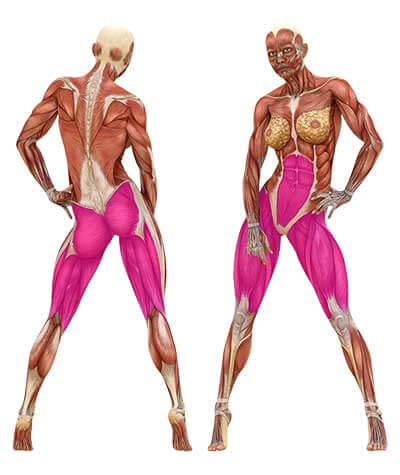 How to perform a hip thrust

Glute bridge vs hip thrust; which is best?

When the glute bridge vs hip thrust debate comes to a head, there actually isn't a great deal of difference between them.  They work similar muscle groups and both exercises can equally be progressed by adding weight.

With that being said; The hip thrust is considered the more powerful exercise.  Namely because this variation uses a wider range of motion.  Ideally you would start with glute bridges and move onto hip thrusts.

However, to summarise; which one you adopt ultimately boils down to your own personal preference.  Neither will restrict your ability to make ongoing gains, since you can just add more weight as you get stronger.

Glute activation and engagement is vital when performing weighted bridges or thrusts.  To help you achieve efficient results, focus on the target muscle throughout the set.  If you are feeling the tension, or a slight ‘burn’ in the muscle with each rep, you can safely say it's engaged.

If glute engagement is an issue for you, practice as much as you need to before you load.  Slow the movement right down and ensure that you are squeezing your glutes at the top.

Where to include these in your workout

Now that the glute bridge vs hip thrust matter has been cleared up, it's time to choose your exercise and place it in your overall workout plan.

With that said; beginners shouldn't get too hung up on exercise placement.  Your priority for now should be to show up and perform all of your exercises correctly.

For the more advanced lifter; exercise order must be considered when building your workout plans.  As a general guide; isolation exercises should be reserved for the latter part of your workout. This is because you should always begin your workout with your more challenging compound moves.  Since these are free weight exercises, they should be placed after your primary compound lifts and before your cable/assisted exercises.

What other glute exercises can you do?

Neither of these exercises are the be all and end all of your glute gains.  While you may have come here to settle the glute bridge vs hip thrust debate, you should also consider other glute exercises to add to your routine.

You actually have a lot of options when it comes to building your glutes.  So try some of these other exercises if you’re not a fan of the above:

What about squats, deadlifts and lunges?

Squats, deadlifts and lunges are fantastic compound exercises and you absolutely should be doing them.

On the other hand; they may not be your best exercises when it comes to building glutes.  To be clear; you could build your glutes with the above exercises alone.  However these power moves also recruit a lot of other muscles in the process.  As a result, you may find that sufficient glute engagement isn’t always possible.  For that reason; you will need to adopt more isolation exercises if you want to specifically target your glutes.

In addition to this; you may find that a front loaded or goblet squat achieves better glute engagement for you.  The same could be said for a sumo stance on your squats and deadlifts, so these moves are worth considering also.

Hopefully by now you can see that the battle of the bridge vs thrust ultimately boils down to personal preference.  The only thing that really matters is that you get the glute gains.  Focus on finding the glute exercises that get you the results you want.  How will you know which ones will get you results?  Do them!

If you really want to test your power, use our One Rep Max Calculator as a tool to help you to confidently build your strength.

One last thing before you leave; it should  be noted that there is more to building glutes than just the aesthetics.  Stronger glutes contribute towards your overall lower body strength, which in turn will help you with your overall strength performance.